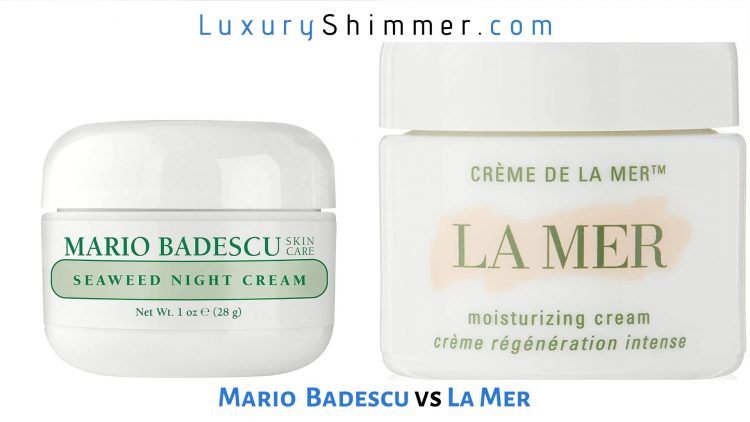 I'm a participant in the Amazon Services LLC Associates Program, an affiliate advertising program designed to provide a means for me to earn fees by linking to Amazon.com and affiliated sites.

Many products claim to be the best moisturizer for dry skin, but with so many options it can be hard to find the right one for you. Today our Mario Badescu vs La Mer review is going to reveal which of these is ideal for your skin. Many people call Mario Badescu a La Mer dupe and it’s easy to see why, but is the more expensive La Mer worth the extra cost?

Our La Mer vs Mario Badescu review is going to compare these based on uses, effectiveness, absorption, feeling, and then any other differences we can find.

Read on and you’ll see which moisturizer is best for dry skin.

So, which specific products are we reviewing here?

We are going to compare Mario Badescu Seaweed Night Cream vs La Mer Crème de la Mer Moisturizer. Some products might match differently, so we recommend taking a look and seeing if one meets your needs better.

The reason we are comparing these two is because the Mario Seaweed Mask is often compared to a La Mer dupe that’s way more affordable and just as effective, while La Mer is an intense moisturizer that can be used throughout the day and in most conditions.

We always ask our readers to form their own opinions, but we found that these two stack up well against each other.

If we were to only go by the label, then La Mer is ideal for daytime moisturizing while Mario Badescu is a nighttime moisturizer. Easy enough, right? But let’s be honest, labels are only suggestions. Let’s look at how these can really be used.

Both of these have been shown to be very powerful moisturizers that can be used throughout the day. La Mer is so strong that it can easily work both day and night, depending on your needs. The intense moisture has been lauded by big names like Kim Kardashian and Chrissy Teigen.

On the other hand, Mario moisturizer is also wonderful throughout the day. It’s still lightweight due to its superior formulation, and it keeps your face feeling healthy and lovely all day. While it wasn’t intended as a daytime product, many people found that it does a great job at it.

So while the labels separate them by day and night, we found that they do both wonderfully.

Every moisturizer on the market is going to make your skin feel lighter, plumper, and hydrated, but that doesn’t mean they’re all the same. Some deliver very weak hydration that only lasts for a few minutes while others deeply penetrate the skin, ensuring powerful hydration that lasts for hours.

Both of these fall into the latter category. They are extremely powerful, and they share an active ingredient that’s known to be highly moisturizing. They both have seaweed extract, which is exactly why many people directly compare these two in Mario Badescu vs La Mer reviews.

They also both include exfoliants, lovely fragrances, are excellent for dry skin, and are reef safe. Neither includes sulfates or silicones.

However, there are some differences. La Mer is paraben free while Mario Badescu is oil free. Mario Badesu is also cruelty free, free of common allergens, and alcohol free.

While they have similar ingredients, is one better than the other?

They are both highly effective. We will say that La Mer is definitely more hydrating, but we don’t think it’s enough to justify the 10x higher cost. If you really need the most hydration, then La Mer is right for you. If you don’t mind slightly less moisture for a much lower price tag, then we recommend Mario Badescu lotion.

Have you ever had a heavy moisturizer that just refuses to absorb? Maybe you feel some hydration, but it’s so annoying to have clumpy lotion on your face that just won’t disappear. We compared these two based on absorption to see how well they get into the skin and hydrate under the surface.

Both of these performed incredibly well. They were absorbed within minutes and we instantly felt the difference. Only a thin layer was left over, but this is fairly common for even the best moisturizers.

That being said, we found that La Mer absorbed faster and fuller than Mario Badescu. We can’t fault Mario here though because it’s meant to be a nighttime hydration lotion, so it’s meant to take longer. This gives it more time to penetrate your skin and deliver hydration under the surface.

Neither took very long to absorb. La Mer was better, but not by a huge margin. If you only have a few minutes and need moisture now, then La Mer functions better. If you have extra time, then Badescu is nearly as good.

Have you ever felt greasy, oily moisturizer? It’s awful, isn’t it? Your fingers feel gross, and your face feels even worse. Not only that, but some moisturizers feel so heavy that they stick to your skin and add lots of weight, which is so uncomfortable. You want to avoid products like this as they feel awful and tend to work poorly.

We’re happy to report that both of these have a thin, silky feel that barely adds any weight to your face. Not only that, but they glide onto your skin and are easy to remove from fingers. Many people love how they feel, and we found that they are nearly identical in this way.

La Mer was somewhat more luxurious feeling, but that should come as no surprise. It’s the premium item here, but we loved how both of them felt overall. We can’t really say that one is significantly better than the other.

Is La Mer worth it? Is Mario Badescu good? We found many people asking these questions and wondering if one is better than the other. In general, we found that they were nearly equal in many ways, but it depends on what you’re looking for and how much you’re willing to pay.

La Mer Creme was the better of the two in every category. That makes sense, and we’d hope it was better being 10x as expensive. It’s somewhat more versatile, absorbs a little better, is more lightweight, and is a tad more effective.

If you need the best moisturizer and nothing else will do, then La Mer wins the battle here.

However, notice that we keep saying how La Mer is only somewhat better. Mario Badescu moisturizer is nearly as good, making it the ideal Creme De La Mer dupe. It’s significantly more affordable, and yet feels and functions almost the same.

If you don’t mind a product that’s a tiny bit less effective but way more affordable, then Mario is right for you.

What’s the Difference Between Mario Badescu and La Mer?

Curious about what’s the difference between La Mer and Mario Badescu? Surprisingly enough, we found that these products are nearly identical. They have some similar ingredients, feel nearly the same, absorb very well, and are highly effective.

By the way, check out these other Mario Badescu reviews for more information:

To no one’s surprise, La Mer is the better product here. It works better, absorbs better, and delivers more hydration. However, we were surprised to see that Mario Badescu was nearly as good despite being 10x more affordable. It comes as no surprise that this is labeled a La Mer dupe, and even the packaging looks similar!

We think you’d be happy with either. La Mer is better and perfect for those with very dry skin or who demand the absolute best without worrying about the price, but Mario Badescu is nearly the same and way more affordable.

So, which is better? Overall, we have to say that Mario Badescu seaweed night cream is the better of the two. Yes, La Mer is more effective, but it’s only by a small margin. We don’t think it’s enough to justify the much higher price tag. We think more people would prefer Mario as it’s nearly as good, but at a reasonable price that anyone can afford.

Let us know what you think, we’d love to hear from you!